Concurrency control makes sure that users see consistent states of the database even though users' operations may be concurrent. Recovery makes sure that software or hardware failures don't corrupt the database state. Together, these DBMS components make things easier for developers who create applications on top of a database.

If we don't use serializable schedules, the following conflicts will happen*:


*All these conflicts will be discussed in a later section, Isolation Levels.


There are two ways to test serializability:


A schedule is conflict serializable if and only its precedence graph is acyclic.

Two phase locking is sufficient (but not necessary) for implementing serializability, and consists of two rules:
The second rule gives 2PL its name:
2PL is not cascadeless, which means one transaction's abort causes other transactions to abort. Cascadeless schedules are recoverable


There are several variants of 2PL:

Deadlock happens when each transaction in a group is waiting for another transaction in the group to release a lock, so no transaction can make progress. There are two ways to deal with deadlocks:

Levels define how transactions trade concurrency for consistency. In all levels, write operations are well-formed and exclusive locks are long duration (they are held until the end of a transaction). If exclusive locks were short duration, this would allow the following tricky scenario where transaction 0 writes A, transaction 1 writes A, and transaction 0 aborts. This is because:
Thus, the difference between the levels depends on whether:
The levels from weakest to strongest are:
An alternative level to serializable is snapshot isolation. In snapshot isolation,


Snapshot isolation prevents all the issues that serializable does:


However, snapshot isolation is not the same thing as serializable. Consider this issue known as write skew:

Locking can happen not only at the tuple level, but also at the page, relation, or database level. There's always the trade off between concurrency and locking overhead: fine granularity means maximum concurrency, but also means a transaction will have to acquire a larger number of locks.

In hierarchical locking, there are three new kinds of locks in addition to shared and exclusive:
Another concept to know for hierarchical locking is lock escalation, which allows a DBMS to automatically adjust the granularity: if a transaction is acquiring locks on a large fraction of the granules that make up a larger granule, the system can try to grant the transaction a lock on the larger granule. This is useful since the access pattern of a transaction is usually not known until runtime.

Locking is pessimistic because it assumes transactions will probably conflict with each other. On the other hand, optimistic concurrency control allows transactions to execution without acquiring any locks. 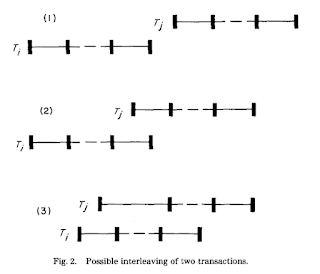 OCC might be more appropriate for in memory databases since in locking, a shared data structure like the lock table might be a bottleneck. On the other hand, in OCC, each transaction's thread has a local read and write set.

The buffer manager transfers data between main memory and disk in pages. Pages in the volatile buffer pool are updated, and eventually written out to disk. The buffer management policy is made up of two properties:
NO-STEAL/FORCE gives the least amount of recovery work. However, it really slows down the database during normal operation: NO-STEAL makes the buffer manager maintain updated data in-memory or in a temporary location on disk until a transaction commits. FORCE makes writes slow.  Thus, most buffer managers follow the STEAL/NO-FORCE policy.

To handle UNDOs and REDOs, DBMSs rely on logs. A log is a file that stores info about the transactions and the database state at certain points. Each entry in the log is a log record. The LSN (log sequence number) is a unique identifier for each log record. They are usually assigned in a monotonically increasing sequence. When an update is made to a data item, the corresponding LSN is written to the page containing the updated data item for easier recovery. Additionally, there are periodic checkpoints, which write checkpoint records about the current state of the database to the log.

There are two kinds of logging, and a compromise between them:
The WAL protocol makes sure that if the database crashes, the log contains enough data to UNDO and REDO when a STEAL/NO-FORCE buffer management policy is used. The protocol specifies:
2PL acid concurrency concurrencycontrol isolation locking optimisticconcurrencycontrol recovery stealnoforce wal

Popular posts from this blog

This winter break, Andrew (my brother) and I worked on board2board, a collaborative drawing web app that uses a computer's webcam for object detection. We were inspired to create this after realizing that at least on our Macs, it was annoying to draw on the trackpad or having to switch back and forth to our iPads. Why not draw in the air instead?

Features include using the space bar to toggle between drawing/not drawing...

...pressing the "c" key to clear everything...
...multiple users collaborating in the same session (hover over avatars to see full usernames)...


...and being able to choose between detecting green or blue drawing objects. For example, in the gif below, using a green marker is much more accurate. We added this feature after finding that object detection accuracy heavily depends on where the user is. If there's a lot of other blue, then a blue marker wouldn't be as easily tracked.

Check out my brother's blog post for more details, including…
Read more 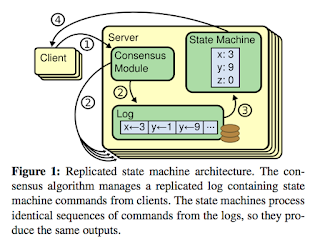 Note: For implementation tips, see the end of this blog post.  Introduction Consensus algorithms The replicated state machine approach is useful for providing fault-tolerance in distributed systems. It lets a cluster of unreliable machines continue operating even when some of its members fail. In this approach, machinesusually use a replicated log to stay in sync. As shown in the figure below, each server's log stores the same commands in the same order. Every state machine executes commands from its own log in order. State machines are deterministic, so each produces the same order of outputs. Once the majority of machines have responded, the command is done executing.
Consensus algorithms ensure that the replicated log stays consistent. In the figure above, clients send commands to a server's consensus modul…
Read more 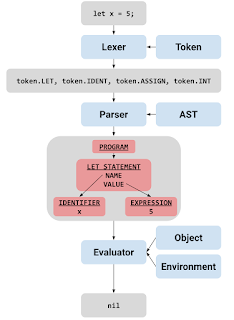 In this post, I'll be giving a high-level overview of interpreters, why they're interesting, and how they work. I'll be referencing my repo, go_interpreter, which is a simple interpreter written in Go for a toy language. The figure below shows the structure of our interpreter with an example input:
What is an interpreter?  An interpreter is a language processor that seems to directly execute the source program on user input:
In contrast, a compiler first takes in a source program and translates it to an executable machine code target program. Then, the user can pass in inputs to this target program and get outputs.
In general, an interpreter is better at reporting errors since it's processing statements one at a time, and a compiler is faster at generating outputs from inputs.

In this post, we're going to go over a simple interpreter that is capable of supporting:
integers, booleans, strings, arrays, hashmapsprefix, infix operatorsindex operatorsconditionalsglobal a…
Read more